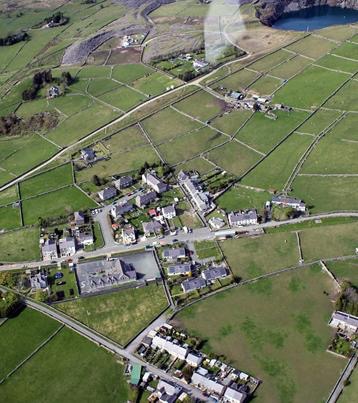 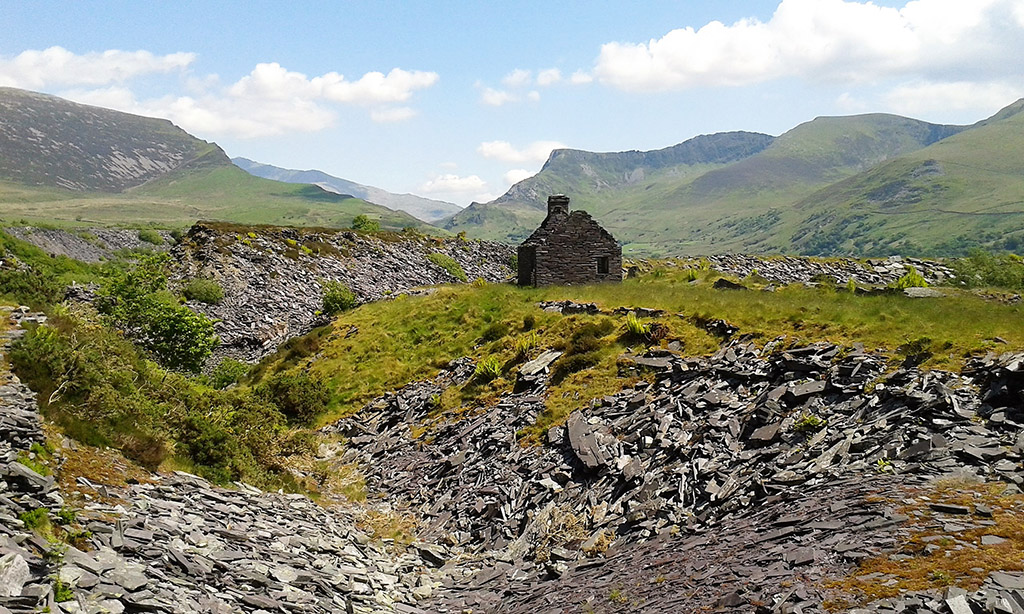 For most of this leg, the Snowdonia Slate Trail follows the North Wales Pilgrims’ Way. Leaving Waunfawr near the Welsh Highland Railway station, the route follows a country lane before branching off up the steep wooded hillside. Eventually, open moorland is reached with views of Mynydd Mawr to the left and the rugged Nantlle Ridge ahead. Soon, the extensive slate workings of the Nantlle Valley are reached and the route passes beneath towering slate tips and between cavernous quarries before emerging in the village of Nantlle.

Follow the main A4085 Roman road through Waunfawr as far as the Welsh Highland Light Railway station, where you turn up the narrow lane signposted to Rhosgadfan. Still following the North Wales Pilgrims’ Path, follow a rough footpath up the wooded hillside, over ancient iron stiles, and past long-abandoned cottages onto the open moorland.

After following the North Wales Pilgrims’ Way for some distance, branch off between quarry workings and down into the village of Y Fron. After crossing some fields, take the path, firstly along an old tramway, then down a bracken-covered field, where the path can become indistinct.

The route here requires concentration as you go down the hillside between the impressive quarry workings and among the cascading slate tips and ruined slate mills. Finally, the Trail emerges onto a broad track which leads into Nantlle village.

The Welsh Highland Railway (WHR) was formed in 1922 from the merger of two companies – the North Wales Narrow Gauge Railways (NWNGR) and the Portmadoc, Beddgelert and South Snowdon Railway (PBSSR) (successor to the Portmadoc, Croesor and Beddgelert Tram Railway).

The NWNGR had originally built a line from a junction with the standard gauge London and North Western Railway line at Dinas to Bryngwyn with a branch from Tryfan Junction via Waunfawr to Llyn Cwellyn (Snowdon Ranger). The line was opened in 1877 and was extended to South Snowdon (Rhyd Ddu) in 1881. This closed to passengers in 1916, but goods traffic continued up to its absorption by the WHR in 1922.

In 1902, the newly-formed PBSSR took over the failed Portmadoc, Croesor and Beddgelert Tram Railway with the aim of extending it to South Snowdon slate quarry in the Nant Gwynant Pass. Work was abandoned by the outbreak of the First World War in 1914. By 1921, the NWNGR, the PBSSR, the Snowdon Mountain Railway and the Festiniog Railway were in common ownership and controlled by the owners of the Aluminium Corporation and the North Wales Power and Traction Company with headquarters at Dolgarrog.
In 1922 the order was made to create the WHR to serve the quarrying industry; it opened in 1923.
It was not a success and the owners tried to attract visitors by opening the first narrow gauge buffet car and by painting their carriages bright colours. However, these ideas did not work and the last passenger train ran on 5 September 1936.
The railway was restored in the late 1990s, early 2000s and includes an extension to Caernarfon.

Y Fron is a small ex-slate-quarrying village with an active population. Local people aim to provide a village shop, a cafe, health and wellbeing services, and, of particular relevance to the Snowdonia Slate Trail, small scale tourism delivered through a luxury bunk house. This will be housed in the recently-closed school building, which dates from 1844 and is a village landmark.
www.fron.org.uk

Nantlle developed at the end of the 18th century to serve the local slate industry. At one time, there were about 40 quarries in the Nantlle valley
The quarrymen came chiefly from Anglesey and Arfon, which were totally Welsh, and this is why the culture remained so Welsh throughout the period. At present, about 80% of the population speak Welsh as their first language. 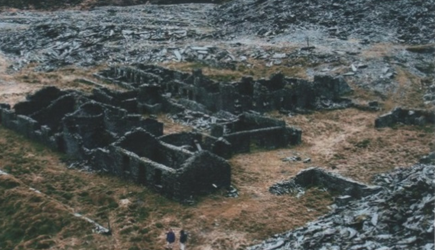