This is completed with just tidying up to do.

Sian has to put together the interpretative boards and some are already on display – In Cwm Penmachno and Y Pengwern. Also, the clips for the website and app are complete.  Another success

Have a look at the website.  There is still some work to be done to the site and to complete the app. Please email us if you find any anomalies on the site.

The metal footpath signs are now up, and thanks to Gerallt Jones of Gwynedd and Caroline Turner of Conwy Council for organising this.

On 10 November, the Trail was launched at Neuadd Ogwen, Bethesda. For the project manager, Aled Owen, Joan Cutting and Raymond Griffiths, the day started early with live interviews for Radio Cymru, BBC Radio Wales and filming for S4C and BBC Cymru at 8.00 in Bethesda.

The afternoon was taken up by a series of presentations given by those who have been involved. Firstly, Aled gave an overview of the project, its partners and funders. He noted that walking was a growing activity and, potentially, the Trail could bring up to £1.3M a year to our slate villages.

Next, Sian Shakespear spoke about the community memory project and the development of interpretation boards based on information received from participants in the project. Sian was followed by John Harold and Owain Thomas of the Snowdonia Society, who described the work of the society.

We were privileged to have as one of our speakers, Lord Dafydd Wigley, who spoke of the current bid for World Heritage Site status for the Gwynedd slate areas.  He emphasised how the Snowdonia Slate Trail formed an important link between these areas and would bring our slate heritage and culture to international attention. The 95 delegates then retired for refreshments, including cakes incorporating the Snowdonia Slate Trail logo freshly baked by the local social enterprise, Caffi Coed y Brenin. 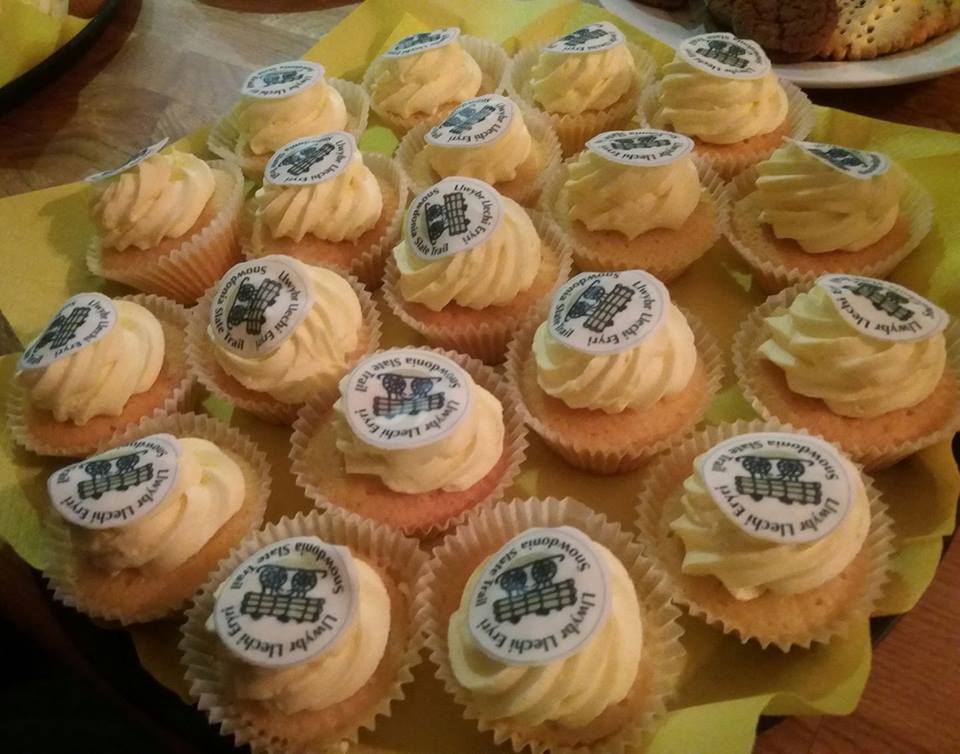 The afternoon continued with a presentation by Anita Daimond on the school arts project and was followed by a performance of an original play about the Great Penrhyn Strike given by 27 pupils of Ysgol Llanllechid.

Nina Steele of Gwynedd Archaeological Trust then gave us a demonstration of the Archwilio free online database of archaeological sites and Rhys Mwyn, folk singer, comedian, raconteur, journalist and amateur archaeologist, spoke about the Romans` use of slate before the afternoon was closed by Denis McAteer, president of Ramblers Cymru. Thanks to Joan, Raymond and Andy Walsh for representing Cwm Community Action Group at the seminar.

The evening saw a Grand Concert featuring the Penrhyn Male Voice Choir (conductor: Owain Arwel Davies, accompanist, Frances Davies), Penmachno Choir (conductor,  Liz Green a  accompanist, Geraldine Tunstall) and the Deiniolen Silver Band (conductor: Lois Eifion), hosted by Neville Hughes of Hogia Llandegai. For me the highlights of the evening were Penmachno Choir singing Adiemus by Carl Jenkins and the Penrhyn Choir performing “Nkosi Sikelel’ i Afrika”, South Africa`s national anthem, followed by Molianwn. In the grand finale, all three contributors came together to sing “World in Union”. It was good to see some Cwm residents joining us on what was a fantastic day to celebrate a very exciting project.

Thanks to our funders, particularly Heritage Lottery Fund for their support.

Discussions are ongoing about the Conwy Falls path.

A guide to the Trail will be published in Spring 2018 and we are looking for someone to write a Welsh guidebook.

We are working on creating a Trust to manage, market and maintain the Trail.

A number of local businesses are interested in providing guided holidays along the Trail, and also to contribute to its maintenance.

A number of people and groups have volunteers to be Trail wardens.